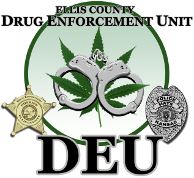 The mission of the DEU is to investigate illegal drug activity primarily in Ellis County; to cooperate with other agencies on drug investigations; to further training and education of fellow officers, schools, and other civic organizations; and to coordinate efforts against drug activity in our community.

Officers assigned the DEU are also full-time police officers and have their other regular duties and shifts to work as well. All officers receive specialized in-depth, hands-on training in drug enforcement issues by attending seminars and classes sponsored and instructed by the Federal Drug Enforcement Administration as well as drug enforcement units in Kansas and other states.

Members of the DEU meet weekly to:

Most importantly, the DEU operates as a team.

The DEU's special equipment, supplies, and any overtime wages are funded through:

The unit is proud to say that it uses drug money, not tax money, to fight the war on drugs.