He was one of thirteen surviving veterans of the Civil War known to have lived and/or died in Hays. He was born in Lebanon, Pennsylvania, married Susan Schwanter on December 25, 1856. During the last 14 months of the Civil War he was a member of Company A, 201 Pennsylvania Infantry which took part in the Battle of Gettysburg. After the war he made his home in Canton, Ohio, where he was employed by the Altman Taylor Threshing Machine Company.

In 1876, at the age of 42, he moved his family to Ellis County and homesteaded 3.5 miles northeast of Hays. He helped to operate one of the first threshing machines in the county and bought and set-up the first header in Ellis County. 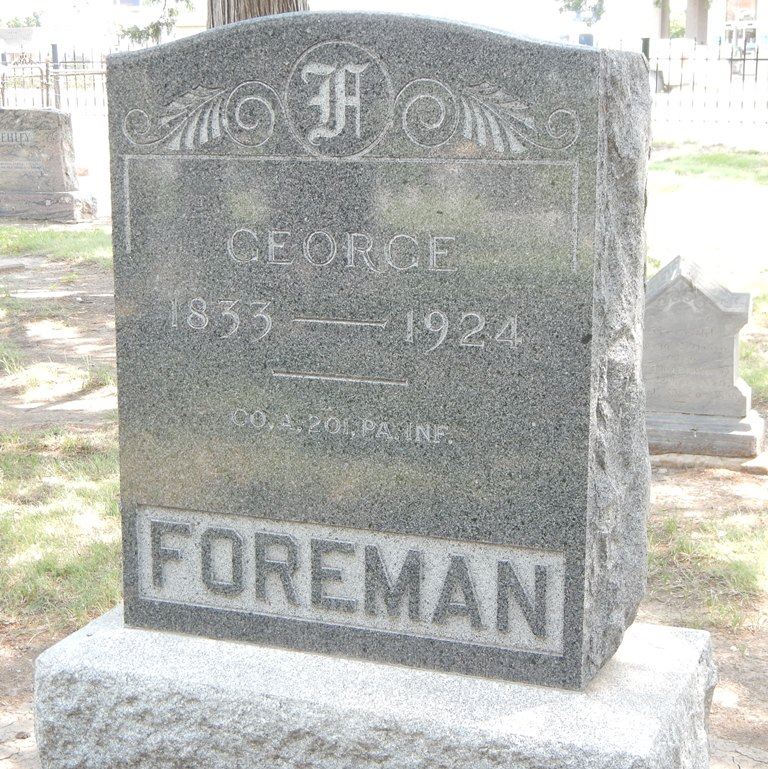 Mr. Foreman died at the age of 91. It was on a Friday afternoon and he had taken his regular walk uptown to visit with his Civil War buddies at the City Hall soldiers' room when after arriving back at his residence, his heart failed and he died quickly.

His obituary mentions that for nearly 35 years he lived in a room at the residence of George King at 111 East 5th Street and every day would walk to the "Old Soldiers" G.A.R. room at City Hall to reminisce with his comrades - "the boys in blue", to keep one another company and freshen each others memories of the Civil War days. Even though he had 6 children and a wife, there is no mention that they were living in Hays City at the time of his death.