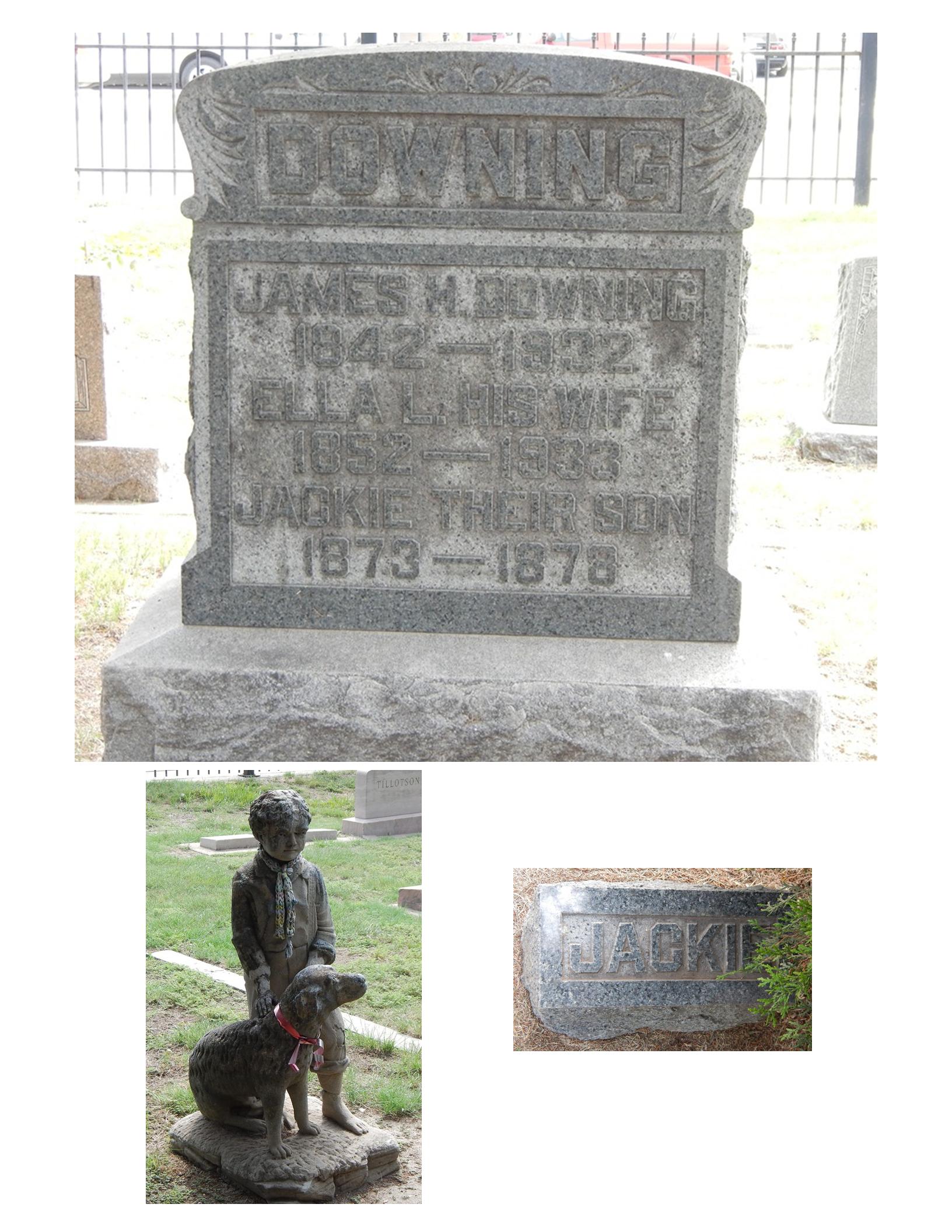 If you notice a grave marker with a statue of a little boy and a dog, then you have found the resting place of five year old Jack Downing. He is the son of J.H. Downing who came to Hays in 1876 and was one of thirteen surviving veterans of the Civil War known to have lived and/or died in Hays. The obituary for Jack tells how this little boy was a favorite around the community with his big dog that was his constant companion as they played and scurried around town. Jack was the only child of Mr. and Mrs. Downing, and after he died of diphtheria, they had a tombstone made of Jackie and his dog.

J.H. Downing was born on Christmas day, 1842 in Scott County, Illinois, and served in Company 'E' 137th Regiment Illinois Volunteer Infantry and was commissary sergeant of his company. After the Civil War, he returned to his home in Council Bluffs, Iowa, and worked at a newspaper office.

In August 1868, he moved to Leavenworth, Kansas, where he was employed as a newspaper reporter by the Leavenworth Bulletin. In 1871, he went to work at the Leavenworth Commercial as a traveling correspondent. About that same time, a newspaper fight was developing in Hays City and Simon Motz, a Hays pioneer and businessman, set out to find a fearless newspaper man.

J.H. Downing was recommended by a mutual friend and he came to Hays in March 1876 and founded the Ellis County Star. His chief distinction as a journalist was when he scooped every newspaper in the country on the story of the Custer massacre at Little Big Horn. In January 1882, he purchased the Hays City Sentinel and consolidated the two papers which he operated for many years as the Star-Sentinel. Although he did not seek political office, he was very active in the Republican Party and was close friends of Vice President Charles Curtis, who was from Topeka, and Senator Arthur Capper, who became the 20th governor of Kansas in 1915.

After his retirement, he and his wife remained living at their home located at 12th & Fort. Although he had received numerous offers to sell their house, they continued to live there until his death on June 18, 1932 at the age of 89. His wife died on June 17, 1933 and both are buried just to the north of their son's plot.