The first burial at Mount Allen Cemetery was Clara Allen, the daughter of Martin Allen. She died at the age of 12 of scarlet fever.

Her father was one of the earliest residents of Ellis County and was employed as a nurseryman in Mendota, Illinois, before bringing his family to Hays City in 1872. Clara had four older brothers and sisters, but three of them died of diphtheria in 1863 when they were very young. Martin Allen was a co-partner of the Big Creek Land Company, which in 1873 bought the unsold lots in Hays City from the original Town Company that had started in 1867.

Burial & Beginning of the Cemetery 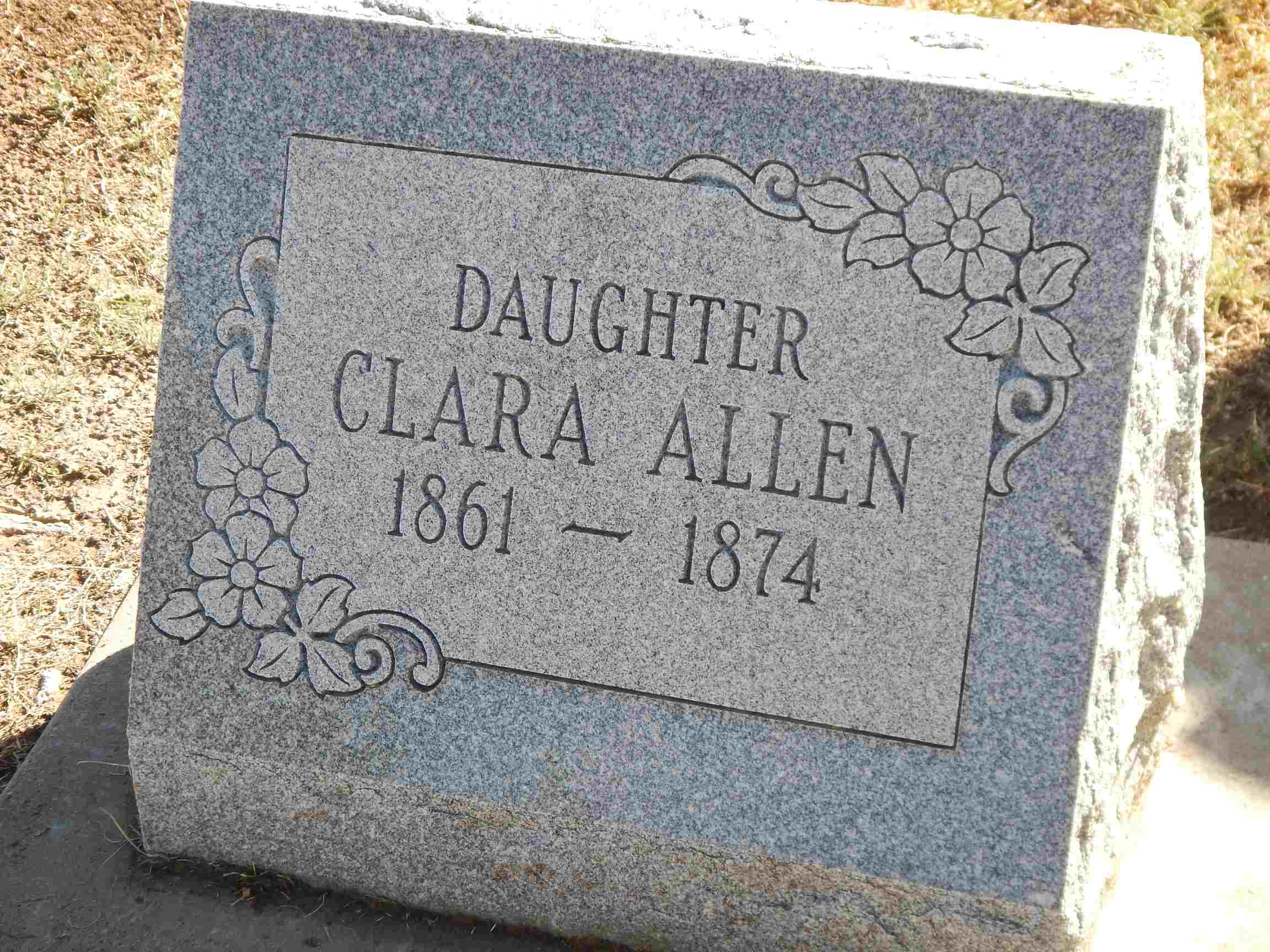 At the time of his daughter's death, there was not an established city cemetery and the only place for burials was on a hill approximately a half mile north of Hays City (which today we refer to as Boot Hill). Many of those buried at this cemetery in the late 1860s could best be described as "rough" citizens and included those who worked at the gambling halls, brothels, saloons and other desperadoes who followed the railroad track construction west.

Martin Allen did not want his daughter to be buried at this cemetery and therefore donated an acre of his own farm land and persuaded the town company to give the remaining land needed for a public cemetery. The original grave marker has since been replaced with a granite headstone. Clara also had a sister who was three years younger who lived in Hays with the family and was married to Shephard Hutchinson on December 22, 1886, in Hays. Clara's mother, Elizabeth Augustine Allen is also buried at Mount Allen Cemetery.

Martin Allen was born in Monroe County, Ohio, on June 29, 1827. He was a prominent citizen in Hays City and for a short time period was co-publisher of the Hays City Times. As an agent for the Union Pacific railroad, he assisted a great many emigrants to locate in Ellis County and the surrounding counties.

In November 1877 he was elected county surveyor, became the first horticulturist of western Kansas and was a member of the Kansas State Horticultural Society. On August 17, 1875, the Western Kansas Agricultural Society was organized and Mr. Allen was named president. Mr. Allen was well known for his horticultural endeavors and he planted a variety of trees, hedges, and fruit orchards around his house that he built of limestone just north of the town site of Hays City. That home is still standing and is currently a private residence at 2704 Woodrow Court.

He is also credited for planting the rows of trees from the outskirts of Hays City along Fort Street that extended all the way to his house north of Hays. Mr. Allen left Hays in 1898 to live with his oldest son in Grand Junction, Colorado. Shortly after arriving there, he died on April 10, 1898, and was buried at Grand Junction.

One of the buildings on the Fort Hays State University campus (Martin Allen Hall) is named in honor of Martin Allen. He was a leader in trying to influence the United States government to secure the abandoned Fort Hays Military Reservation to be used as an experimental station for agriculture or horticulture. The land where the fort once stood was eventually divided for use to include the college, a park and agricultural research center.